It’s a shame that the 80th anniversary of the attack on Pearl Harbor received so little public attention. We are living in an era that holds some unpleasant resemblances to the period before the Japanese attack. And we are losing the capacity for surprise that could help us anticipate or avert a similar catastrophe in the future.

Last time: Germany in Europe, Japan in Asia and Italy in the Mediterranean and Africa. This time: Russia, which may soon invade Ukraine in almost cheery defiance of the Biden administration; China, which is building a war machine to seize Taiwan and, if necessary, defeat the United States in open warfare; and Iran, which has turned Lebanon, Syria, parts of Iraq, Gaza and Yemen into client states or satrapies while getting closer to being a threshold nuclear state.

Russia, China and Iran fundamentally reject the notion of a liberal international order. They reject democracy and human rights as political ideals. They see a West in which personal freedoms lead to moral decadence and a diminished capacity for collective sacrifice. They think illiberal authoritarianism — “made more sinister, and perhaps more protracted, by the lights of perverted science,” to quote Winston Churchill — is the wave of the future, not an atavism from the past.

Third resemblance: The direct targets of their aggression are relatively weak.

Taiwan has plans to boost its military budget but now spends barely 2 percent of its gross domestic product on defense. Ukraine has been worn down by years of low-grade conflict with Russian-backed separatists, to say nothing of the corruption and incompetence that has typified its 30 years of independence. Iran has taken advantage of the chaos that followed the Arab Spring and America’s retreat from the Middle East to arm and embolden proxies from Hamas to Hezbollah to the Houthis.

Fourth resemblance: The U.S. — like Britain, France and America in the 1930s — is an ambivalent, wounded and inwardly focused power, unsure as to whether it wants to remain the guarantor of the safety of threatened nations.

In 1935, just before Italy invaded Abyssinia (as Ethiopia was then called), the British weekly Punch mocked the West’s weak response in the face of dictatorial aggression with a satirical poem:

Compare this to some of the ideas now being adopted or entertained for punishing our adversaries. With China, America will send athletes, but not diplomats, to the Winter Olympics in Beijing. With Russia, the Biden administration is considering “blocking Russian oligarchs from using Visa and Mastercard credit cards,” according to The Times. And with Iran, the administration warns that it is prepared to use “other tools” if diplomacy over Iran’s nuclear programs fails — a warning that would sound more ominous if it hadn’t been American diplomatic boilerplate for nearly two decades.

Fifth resemblance: The balance of military power is increasingly shifting against the West.

The United States may still have the world’s most powerful and technologically sophisticated military, much as Britain had the largest navy and France a huge army before World War II. But the U.S. would be hard-pressed to bring decisive power to bear against China in a war for Taiwan, which China would try to win quickly while holding America’s heartland at risk with its growing nuclear arsenal. The Pentagon has also made the mistake of concentrating firepower in a small number of expensive and vulnerable platforms, such as aircraft carriers, rather than distributing power in vast numbers of “good enough” platforms.

In other words, the American military has in some ways itself become one large Pearl Harbor — a magnificent row of battleships of imposing size but dubious utility, complacently anchored in a port we imagined was secure.

Some readers will want to poke holes in these historical analogies, and surely there are many. Vladimir Putin may be a revanchist dictator, but he’s not Hitler. China has sought reunification with Taiwan for over 70 years — it does not automatically follow that it seeks its own version of a Greater East Asia Co-Prosperity Sphere. And Iran, for all of the regime’s malevolence, is a second-rate power at best.

But not all of the nonresemblances cut in our favor. Franklin Roosevelt and Winston Churchill were great leaders capable of inspiring national confidence, even among their partisan opponents. Joe Biden and Boris Johnson are not. After Pearl Harbor, Americans were determined, in Roosevelt’s ringing phrase, to “win through to absolute victory.” Would we be today? And the West proved that it could respond to terrible surprises with surprises of our own, imposing devastating costs on enemies who imagined, unwisely, that we were soft.

Is that what we remain now? Or have we forgotten — much as we’ve all but forgotten Pearl Harbor?

How Can Something Be Racist but Not Racist at the Same Time?

U.S.-China Competition Is Our Best Bet for Climate Progress

What Happened When Poland Put Its Trust in the C.I.A. 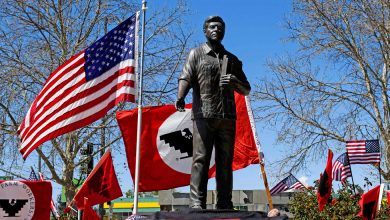