Condoleezza Rice, the first Black female secretary of state, who now heads Stanford University’s Hoover Institution — and who, by her account, attended segregated schools in the Deep South — was a guest last week on “The View.” When asked about the critical race theory debate, she said, “One of the worries that I have about the way that we’re talking about race” sometimes these days is that “somehow white people now have to feel guilty for everything that happened in the past.” She added, “I don’t think that’s very productive.” Of course, as she and we know, there’s more to the critical race theory debate than that. But about the strain of educational philosophy that looks to raise students’ awareness of racial injustice, she said that for Black kids to be empowered, “I don’t have to make white kids feel bad for being white.”

Writing for The Grio, the longtime cultural critic Touré offered a piercing reply, calling Rice a “soldier for white supremacy” and saying that white people today, including children, “should cringe at what their ancestors did.” If school curriculums include the harshest aspects of America’s history, he argued, “I really don’t care if learning this makes white kids feel bad — and if it doesn’t, then they are too heartless.”

Of course, there is a visceral sense of power in fostering white guilt: One has made people realize something and made them see you as deserving of recompense, as harmed and therefore owed. There can be a sense of accomplishment in just demanding that white Americans sit with past wrongs.

But presumably, the goal is to make America “a more perfect union,” as the Constitution has it. And if that’s the goal, our collective efforts to reach it presumably would be about addressing societal conditions rather than these more soul-focused endeavors. One might argue that a realer, not to mention healthier, manifestation of Black affirmation would come from more concrete markers of progress than the dutiful hand-wringing of well-meaning white people about their forebears’ sins.

A compelling reason for fostering white guilt would be that if doing so led white Americans to go out and foster change in society. And sometimes it can — but is white guilt necessary to or the best way to effect societal change?

For the civil rights victories of the 1960s, it wasn’t. We tend to forget how seismic the changes were during that one decade: The Civil Rights Act of 1964, the Voting Rights Act of 1965 and the Fair Housing Act of 1968 were undeniably huge advances, even if they did not (and they did not) end racism or completely level the societal playing field. In any case, all of this did not happen because white people became guilty nationwide.

America’s white majority, and with them America’s political leaders, got behind tangible change because segregation as policy, and the violence required to maintain it, was pragmatically inconvenient on the world stage during the Cold War standoff. Technology was the accelerant, in that television illustrated the civil rights movement in a way that radio and newspapers could not.

Certainly, the televised struggle, and the sympathy of a white countercultural movement that rapidly grew in the ’60s, created a sense of guilt among a certain contingent of, especially, younger white Americans questioning the establishment. But these white kids, for all the fascination they elicit in hindsight as preludes to us moderns, were a relatively fringe element at the time. The mid-20th-century American (white) Everyman tended to lack the visceral sense of revulsion at racism that we now take for granted as at least a courtesy norm.

In his classic “An American Dilemma: The Negro Problem and Modern Democracy,” Gunnar Myrdal observed that “even the white man who defends discrimination frequently describes his motive as ‘prejudice’ and says that it is ‘irrational.’” In other words, the Everyman acknowledged racism but felt no need to disavow it. For example, Presidents John F. Kennedy and Lyndon B. Johnson harbored no special guilt about the challenges faced by Black America but eventually saw it as politically prudent to court the Black electorate.

Thus, in the 1960s, civil rights leaders were able to take advantage of chance configurations. We might take a page from them. The gradual legalization of marijuana could be the start of a general reanalysis of the war on drugs that ravages Black communities. Beyond the current fight over President Biden’s legislative agenda, a new and more targeted demand on infrastructure could and should undergird a focus on training or retraining underserved working-class Black Americans for solid, well-paying vocational jobs. White guilt would be of little relevance amid such on-the-ground developments.

In that light, it bears mentioning that over the decades since the 1960s, when the idea that white Americans need to be guilty settled in among a contingent of Black thinkers, it seems that somehow, no matter what we say or do, white people are never guilty enough and white guilt is supposed to go on in perpetuity. Might it be that the effort to make white people any guiltier than they are is a Sisyphean effort? The dream that white people will, en masse, shed their “fragility” and embrace feeling really, really guilty is about as likely as Schoenberg’s ever being brunch music for more than a rarefied few.

We seek for enlightened white people to acknowledge that they are complicit — to use a term especially popular in recent years — in a system constructed for the benefit of whites. Note that even that word is a strategy to shake white people by the collar, in that telling them they are complicit is a fresher way of saying that they should be guilty. Because many white Americans have a way of resisting feeling guilty about things racial that they know are bad but that they themselves didn’t do, using a euphemism such as “complicit” is a way of trying to make the case without eliciting those typical objections: “I’ve never discriminated against anyone”; “I didn’t own slaves.”

But even phrased as complicity, the charge requires not just the occasional acolyte but the white populace as a whole to feel guilty about things people did not individually do, that were often done in the deep past rather than by their parents and that were done within a vast societal system, the operations of which even experts disagree on. That’s a lot. Recall also that most human beings are not, and will never be, dedicatedly history-minded — we live in the present.

What’s more, I don’t completely trust white guilt. It lends itself too easily to virtue signaling, which overlaps only partially, and sometimes not at all, with helping people. I recall a brilliant, accomplished, kind white academic of a certain age who genially told me — after I published my first book on race, “Losing the Race: Self-Sabotage in Black America,” two decades ago — “John, I get what you mean, but I reserve my right to be guilty.” I got what he meant, too, and did not take it ill. But still, note that word “right.” Feeling guilty lent him something personally fulfilling and signaled that he was one of the good guys without obligating him further. The problem is that one can harbor that feeling while not actually doing anything to bring about change on the ground.

So, I’m with Secretary Rice. Especially because people can actively foster change without harboring (or performing?) a sense of personal guilt for America’s history. Black America likely will not overcome without some white assistance. But I’m not convinced that the way this happens is with white people’s cheeks burning in shame over their complicity. Maybe they can just help.

Have feedback? Send a note to McWhorter-newsletter@nytimes.com.

John McWhorter (@JohnHMcWhorter) is an associate professor of linguistics at Columbia University. He is the author, most recently, of “Woke Racism: How a New Religion Has Betrayed Black America.”

What We Did the Last Time We Broke America 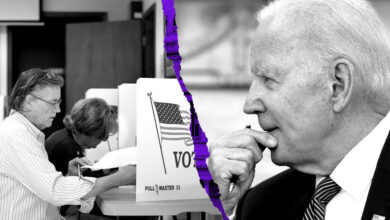 Can Democrats Avoid a Midterm Wipeout?

For This Supreme Court, Justice Isn’t Blind. Faith Is.