As Trump rose to the presidency, one explanation that swept political science was the power of polarization, specifically a phenomenon known as affective polarization, but a keen group of scholars now suggests that this approach is inadequate.

It would be hard to describe the state of political competition in America more accurately than as “a poisonous cocktail of othering, aversion and moralization” — the subtitle of an article, “Political Sectarianism in America,” published by 15 important scholars in Science magazine in November 2020, including Eli Finkel, Peter Ditto, Shanto Iyengar, Lilliana Mason, Brendan Nyhan and Linda Skitka.

The Science essay argues that

The costs, the authors argue, are substantial:

Yphtach Lelkes, a professor of communications at the University of Pennsylvania, has his own description of the state of American politics:

David E. Broockman, Joshua L. Kalla, and Sean J. Westwood, political scientists at Berkeley, Yale and Dartmouth, challenge the Science magazine argument. Instead, they make the case in their December 2020 paper, “Does Affective Polarization Undermine Democratic Norms or Accountability? Maybe Not,” that partisan hostility may be destructive, but attempts to moderate it will not diminish party loyalty or tolerance for anti-democratic changes in election law or the decline in political accountability.

Broockman and his co-authors agree with much prior research that has found, as they describe it:

Citizens’ more negative sentiment toward opposing political parties than their own” — affective polarization — “has been growing worldwide. Research on this trend constitutes one of the most influential literatures in contemporary social science and has sown alarm across disciplines.

Where Broockman, Kalla and Westwood differ is with those who take the growing partisan hostility argument a step farther, to contend that “if citizens were less affectively polarized, they would be less likely to endorse norm violations, overlook co-partisan politicians’ shortcomings, oppose compromise, adopt their party’s views, or misperceive economic conditions.”

“We find no evidence that an exogenous decrease in affective polarization causes a downstream decrease in opposition to democratic norms,” Broockman and his co-authors write, adding: “We investigate the causal effects of affective polarization on a variety of downstream outcomes,” in five political domains, “electoral accountability (measured by both levels of party loyalty and how individuals react to information about their actual representatives), adopting one’s party’s policy positions, support for legislative bipartisanship, support for democratic norms, and perceptions of objective conditions.”

The Broockman argument has some strong supporters. Jan G. Voelkel, a sociologist at Stanford, and eight colleagues, make a very similar case to Broockman’s in their May 2021 article “Interventions Reducing Affective Polarization Do Not Improve Anti-Democratic Attitudes.”

These efforts have mixed results:

“These findings,” they add, “call into question the previously assumed causal link of affective polarization on anti-democratic attitudes.”

Voelkel and his co-authors conclude that “Our findings suggest that affective polarization may not be as problematic for democratic societies as is widely assumed.”

In sum, their research shows that

Cynthia Shih-Chia Wang, a professor of management and organization at Northwestern’s Kellogg School of Management, agreed that the Broockman and Voelkel articles suggest that analysts

But, she added, “it may be a bit early to dismiss affective polarization as a predictor of anti-democratic attitudes and other potentially pernicious outcomes.”

I asked Brendan Nyhan, a political scientist at Dartmouth, about the Broockman and Voelkel articles, and he wrote back: “These papers are very important. Though more research is needed, I am convinced that we have potentially overstated the causal role of affective polarization in many negative phenomena in American politics.”

The Broockman and Voelkel papers suggest, Nyhan continued, “that we should renew our scrutiny of the role of elites and political systems in fomenting illiberal behavior” and that the problem “is not affective polarization as such; it’s a political system that is failing to contain significant democratic erosion and illiberalism being driven by G.O.P. elites (though affective polarization may help encourage and enable such tactics).”

Erik Peterson, a political scientist at Texas A&M University, elaborated in an email on the significance of the Broockman paper:

Peterson cautioned, however, that research he and Westwood performed for an October 2020 article, “The Inseparability of Race and Partisanship in the United States,” found “that shifts in affective polarization do influence attitudes and behavior towards racial out-groups.”

What this suggests, Peterson continued, is that affective polarization

Mina Cikara, a professor of psychology at Harvard, replied to my inquiry by pointing out that there was reason to doubt some of the claimed consequences of affective polarization before the publication of the Broockman and Voelkel work:

The publication in May 2019 of a seminal essay in the Annual Review of Political Science, “The Origins and Consequences of Affective Polarization in the United States,” by Shanto Iyengar of Stanford, Lelkes, Matthew Levendusky of the University of Pennsylvania, Neil Malhotra of Stanford and Westwood, reflects the prominence of theory of affective polarization before the release of the Broockman and Voelkel papers.

Iyengar and his colleagues wrote:

Most recently, the issue of polarization and violence has become particularly salient. On Sept. 15, Westwood, along with Justin Grimmer of Stanford, Matthew Tyler Stanford and Clayton Nall University of California-Santa Barbara, published an essay, “American Support for Political Violence is Low,” arguing that claims by sociologists and political science of a growing threat of political violence are exaggerated.

Careful examination of the data on which these claims are based, however, shows that

Insofar as there is a relatively small constituency that supports violence, the authors contend that this support is not directly linked to politics:

I asked Westwood and Broockman about what they think the cause of our political dysfunction is, if, as they say, affective polarization is not the cause.

There is, Broockman continued, “some other research out there that thinks carefully about the sources of support for democratic norms that is grounded in thinking more carefully about the theoretical mechanisms by which such reductions might occur.” He specifically cited “Biased and Inaccurate Meta-Perceptions about Out-Partisans’ Support for Democratic Principles May Erode Democratic Norms,” which argues that partisan misjudgments of their opponents exaggerates hostility.

Westwood, in turn, replied to my inquiry:

James Druckman, a political scientist at Northwestern and a co-author of the Voelkel paper, contended in an email that while the Broockman, Voelkel and Westwood papers may have diminished the salience of affective partisanship, at the same time the papers call for a wider ranging search in the effort to figure out how and why American politics have gone so far off track in such a short time:

Figuring out what is driving us apart and what we can do about it was never going to be easy.

The World Expects Black Men to Make Themselves Smaller. My Brother Never Did.

How Do We Avoid the Next Debt Limit Debacle?

Books That Immerse Me in a Better World 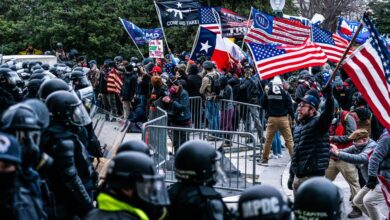