BRUSSELS — In July 2020, along with European officials and experts, I was asked to take part in a policy game. Convened by a German think tank, we were asked to play out what would happen if either Matteo Salvini or Marine Le Pen, the far-right leaders in Italy and France, came to power. We spent a few hours frenziedly debating how the European Union would respond to each occurrence. Of one thing we were sure: It would be a disaster.

Neither scenario, of course, materialized. In Italy, Mario Draghi is prime minister and Mr. Salvini is sliding in the polls. In France, President Emmanuel Macron defeated Ms. Le Pen to win re-election. On the same day, Slovenia’s right-wing prime minister, an admirer of Donald Trump, lost too. It was a good few hours for Europe.

That’s about as long as it lasted. In Brussels and other European capitals, relief turned quickly to angst. The French parliamentary elections in June, in which Mr. Macron could lose his majority and be forced into awkward compromises with the far right or the radical left, are the new worry. Prime Minister Viktor Orban of Hungary, after securing re-election in early April, remains a disruptive presence on the scene. And Russia’s war in Ukraine grinds on.

Such anxiety is common in Europe. Many people seem to think that the European Union, which in different forms has provided Europeans with prosperity and peace since the 1950s, is always on the cusp of ruin. The past decade — encompassing a debt crisis, a refugee crisis, Brexit, the rise of the far right and, not least, the pandemic — has set off regular cries about the coming end of the union. And yet, despite everything, it endures. In a world of war and calamity, it needs to pull together even more.

The European Union’s solidity is perhaps its greatest asset. But it can’t rely on institutional stability alone. Europe is a dangerous place again. As a former prime minister of Sweden, Carl Bildt, once said, the union used to be surrounded by friends, but now it is surrounded by fire. Some neighbors are actively trying to undermine the union and destroy all that Europe stands for — with the war in Ukraine the latest terrifying example. In the face of such peril, which threatens to return the continent to barbarism, the case for binding together more tightly is all the more compelling.

Fortunately, Europeans have gotten to know one another better in recent times. During the debt crisis a decade ago, people across the continent watched heated debates in Greece’s parliament. The fate of the country, bound to painful economic reforms, resonated far beyond its borders. Europeans likewise take great interest in Poland and Hungary curbing the independence of their judiciaries and press, and want the rule of law to be respected in member states.

Russia’s brutal war in Ukraine, and China’s growing economic and political coercion, have brought Europeans together even more. They realize they cannot weather these storms alone: Feeling their way of life is on the line, their reflex is to stick together. They may still not be very happy with the European Union — the way it works, the kinds of compromises it relies on — but they are certainly happier in it.

Such common feeling is of a piece with the union’s structure. The European Union has a federal, statelike construction that should be strong enough to defend common European interests in the face of geopolitical adversity. It has an executive (the Commission), a parliament representing citizens, a senate representing states (the Council), an independent court of justice, a central bank and even a common border guard. This sturdy federal architecture is the bedrock of Europe’s stability.

In practice, however, it’s not like the federal structures in America or Germany. In Brussels, the de facto capital of the union, member states make most of the decisions. When European heads of state and government meet, they do so as national leaders. They are elected to act in the interests not of Europe but of their own nations. Whatever the issue at hand, they sit down, put their national concerns on the table and start bargaining. In the end, each will find some of its demands in the eventual compromise.

The system certainly has its advantages. It more or less guarantees national ownership of European decision-making; everyone recognizes their fingerprints on the final agreement. This sense of ownership helps to explain why the union has survived so many crises in recent years: Member states have invested in it, depend on it and, crucially, wantit to survive. But the downside to this approach is that by seeking consensus on almost every issue, Europe becomes as strong only as its weakest link. Leaders regularly make half-baked decisions because some countries refuse to go further, with results that do not always meet Europe’s real needs.

Examples are legion. Hungary, for instance, has blocked several foreign policy statements against Russia or China that all other member states agreed on. Poland, for its part, has single-handedly diluted Europe’s climate goals. And before the presidential elections in France, the government there delayed a decision on a European oil embargo against Russia, fearing the resulting rise of energy prices could favor Ms. Le Pen in her campaign against Mr. Macron. Often, Europe is the plaything of member states seeking to promote their own narrow interests. Mr. Macron, however “pro-European,” is no exception.

That’s why elections often cause such headaches. Democracy, to be sure, is Europe’s strength. It is the union’s core value, its beating heart. But democracy is also Europe’s weakness. That’s because the union is not really European: Instead, it involves 27 separate, national democracies. If one of them produces a Eurosceptic government, it can endanger the entire European project, which depends on unanimity. The union is effectively held hostage every time elections are held somewhere — hardly a sustainable way to do things.

The French election, Mr. Macron said, was “a referendum on Europe.” The problem with Europe is exactly that: Every election is a referendum about Europe, in every corner of the continent. It would be strange if a state election in Montana or Mississippi risked undoing the Republic or derailing its foreign policy. In Europe, this is normal practice. That’s partly why, despite its success as a global economic powerhouse and a beacon of stability, Europe often lacks confidence and looks vulnerable in the mildest headwind.

Yet this paradox needn’t be permanent. In a world defined by instability, great power competition and rising prices, Europe must look after itself — and it has the means to do so. A phased embargo on Russian oil, likely to be finalized this week, is just a start. In the wake of the war in Ukraine, collective provision of defense and security is also a must, as is an energy union. What’s more, some kind of fiscal union — augmenting the current monetary union — might also be necessary, to coordinate the serious investments needed to shore up Europe’s resilience. Recognizing the need for bolstered unity, a group of European intellectuals last week even called for a United States of Europe.

I’m not sure the union will ever come to that. But it would be nice if at the policy game in Berlin this year, instead of fretting over worst-case scenarios, we could perhaps let ourselves imagine a bolder, stronger European Union. If we could all allow Europe to stand a little more on its own feet, it would make a world of difference.

Caroline de Gruyter (@CarolineGruyter) is a Brussels-based European affairs correspondent and columnist for the Dutch newspaper NRC Handelsblad and a regular contributor to Foreign Policy. 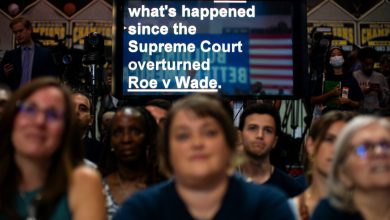 Trump’s Iran Policy Has Become a Disaster for the U.S. and Israel