Along a bare torso and down a thigh, the sun glints through ocean waters and bathes coral and fish in aqueous light. On a lower leg, vivid frogs tense, as if preparing to jump from dewy leaves. A mischievous child with twinkling blue eyes stares out from an inner bicep.

In his home studio in the northern Italian village of Grado, Alex De Pase reviewed photographs of some of the thousands of designs he had inked over his career as a tattoo artist. But these skinscapes might not be possible to replicate in 2023 — at least not with the same set of colors.

New regulations on tattoo inks and permanent makeup that began taking effect across the European Union this January were meant to reduce the risk of including ingredients that could be health hazards. The regulations have also caused the biggest shakeup of the industry in memory, with ink manufacturers reformulating entire product lines to comply.

The possibility of even more disruption hangs over artists’ heads next year, when bans go into effect on green and blue pigments that ink manufacturers say may be impossible to replace. This has provoked an uproar among tattooists who have argued the restrictions are overbroad, sow unnecessary concern among clients and undermine their art.

Europe’s regulations could portend changes in the United States, where the Food and Drug Administration has some oversight of inks and pigments. Last November, when Dr. Linda Katz, director of the agency’s Office of Cosmetics and Colors, gave a presentation at a conference on tattoo safety in Berlin and was asked whether the country would align its regulations with Europe’s, she responded: “That remains to be seen, and we’re working on that area itself.”

Mr. De Pase, who is known for the photorealism of his tattoos — particularly his portraits — which he inks in his home studio, says he carefully mixes different shades to achieve the subtleties of skin tone. “I’m well-known because of my color tattoos,” he said. “For me, this is an issue.”

Once the rebellious mark of sailors and bikers, tattoos long ago shed any vestige of being a fringe art form. Surveys indicate about a quarter of Europeans aged 18 to 35 and nearly one-third of American adults sport tattoos. Given all that inked flesh, documented complications are relatively uncommon and typically involve bacterial infections or allergic reactions. But regulators have not kept up with the popularity of body art: Only a few European countries exert national oversight of tattoo inks. Until this year, there were no binding standards across the European Union.

Modern tattoo inks are complex concoctions. They include insoluble pigments that provide shade or color, binding agents to keep the pigments suspended in liquid as they are transferred to the skin and water and other solvents such as glycerin and alcohol that influence the ink’s qualities, along with preservatives and other additives.

Upon injection, some pigment remains permanently in the skin, but it can also migrate to the lymph nodes. When exposed to sunlight or during laser removal, pigments may also cleave into new, potentially more toxic compounds and circulate throughout the body.

Over the years, traditional ink manufacturers have incorporated heavy metals such as barium and copper into their pigments to create a widening palette of colors, and neurotoxic agents like cadmium, lead and arsenic have been documented in some inks in high concentrations. These elements may also be found in so-called vegan inks, which merely exclude animal-derived glycerins and other ingredients.

Since 2015, Europe has required manufacturers to label inks indicating hazardous ingredients they contain. But because raw pigments are manufactured at industrial scale for use in all manner of products, including clothing and automobiles, they are not always of a purity one might hope for in a substance injected into one’s skin. 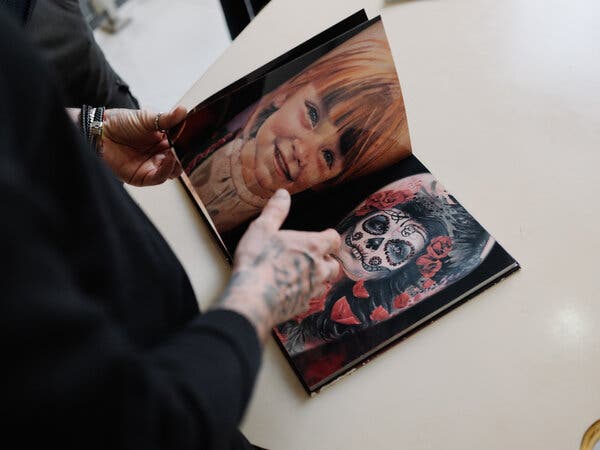 Past works by Mr. De Pase. He is known for his photorealistic tattoos.Credit…Ciril Jazbec for The New York Times

Ines Schreiver, co-director of a center of dermatotoxicology at the Federal Institute for Risk Assessment in Germany, said that basic questions about the body’s exposure to the inks remained unanswered. Among the unknowns are how much ink enters the body, the relationship between that exposure and adverse reactions that occasionally follow and any illness that may emerge years later.

“I would not use the word ‘safe’ or ‘unsafe’ to describe tattooing,” she said. “I tell my friends to inform themselves about possible side effects and about the uncertainties.”

After lengthy deliberations by the European Chemicals Agency, the European Commission opted to focus on substances known to be hazardous, banning a long list of chemicals already prohibited for use in cosmetics and sharply limiting the concentrations of certain corrosive or irritating compounds.

The ban included two pigments, Blue 15:3 and Green 7, based in part on decades-old research that linked their use in hair dyes with elevated risk of bladder cancer. Acknowledging ink manufacturers’ objections that there were no substitutes for those pigments but lacking evidence to affirm their safety, the commission delayed its prohibition until next year.

“The substances are injected into the human body for permanent and prolonged contact — for life,” said Ana María Blass Rico, a commission policy officer. “So that’s why it’s so protective.”

Dr. Jørgen Serup, a Danish dermatologist who since 2008 has run a “tattoo clinic” at Copenhagen’s Bispebjerg Hospital, said regulations were overdue. But in his opinion, these were poorly targeted, proscribing many substances that would never be used in tattoos while failing to address known problems like bacterial contamination of inks during production. Among thousands of patients he treated for complications, he found that red was more commonly associated with allergic reactions. “There is, from the clinical side, no reason really to ban blue and green,” he said.

Regulators are in a difficult position, according to Lesliam Quirós-Alcalá, an assistant professor at Johns Hopkins Bloomberg School of Public Health and an expert on chemical exposures and their potential health effects. There are over 40,000 chemicals known to be in commercial use, and little is known about the hazards they pose. Furthermore, those hazards may differ for a person based on many factors including their level of exposure to the substance, genetic predisposition and pre-existing disease. “No scientist could tell you right now that this is the chemical you have to worry about the most,” she said.

But banning substances and leaving industry to find substitutes isn’t necessarily a solution, either. “It’s not uncommon for us to replace chemicals that we know could increase the risk of adverse health effects with regrettable alternatives,” Ms. Quirós-Alcalá said.

The United States has taken a more hands-off approach than Europe has. The F.D.A. has the regulatory authority to approve pigments as safe, but no tattoo ink manufacturer has sought that designation, and no U.S. ink manufacturer has been required to disclose ingredients either.

With less oversight over the broader category of cosmetics, the agency is generally limited to pursuing adulterated or mislabeled products and issuing safety alerts. Consumer advocates have called on Congress to update the 83-year-old Food, Drug and Cosmetics Act to grant the agency greater oversight, to little avail. In response to questions, the agency provided a written statement indicating it was aware of the European regulations but had not assessed the risk of the restricted pigments.

Adapt or Fight Back

Tattooists, suddenly concerned that their art form might be in peril, protested the regulations. In October 2020, some launched a petition to “Save The Pigments,” which spread through the global community of tattoo artists and their extensive social media followings. To date, the petition has garnered more than 178,000 signatories.

Among those sharing the petition was Mario Barth, chief executive of Intenze Tattoo Ink, a Las Vegas-based ink manufacturer. He said the industry could have headed off the regulations by developing its own standards, and he blamed a lack of cooperation on ink manufacturers still prone to viewing themselves as counterculture loners. “So, the people who had no clue about it just said, ‘OK, then, let’s just ban it all.’”

In the United States, where many tattoo inks used in Europe are produced, manufacturers rushed to reformulate their products to meet the new standards. One of the leading suppliers, World Famous Tattoo Ink, has a new facility in Greenville, S.C., where each month in a sterile clean room, 400,000 bottles are filled and packaged.

The owner, Lou Rubino, opened his first tattoo supply shop on St. Marks Place in New York in 1998, shortly after the City Council lifted a longstanding ban on tattooing so that underground artists could work openly again. At the time, the company made its inks in a warehouse on Long Island. “I used to have people that would sit there filling the bottles with a commercial iced tea container with a spout on the bottom,” he recalled.

World Famous had updated its products previously, for example to remove a formaldehyde-based preservative that had been banned in Switzerland. But Mr. Rubino said the new regulations have required far-reaching changes, forcing the company to pay laboratories extra to assess whether the products met the allowable limits for the chemicals. Because World Famous did not test its products on animals, employees and their families and friends volunteered their skin to gauge the performance of the new inks.

Although World Famous had been exploring replacements for the banned pigments, Mr. Rubino said they had not yet found any suitable substitutes. “If that doesn’t work out, there’s going to be a lot less blue and green in tattoos,” he said.

Creating new inks to comply with the regulations cost the company millions of dollars, he estimated — and he could not say whether the results were safer. “We’re not sure yet if these are better or worse because we’re adding other things in that have not been used before in tattooing.”

Nordic Tattoo Supplies, which distributes inks across Europe, said World Famous’s color products were the first set in compliance with the new regulations that went on sale in early January — at more than double the price of their previous inks. Nevertheless, demand far exceeded supply, and they had to ration the quantity sold per customer. A spokesperson for Nordic, Jenni Lehtovaara, said the situation was improving as other manufacturers brought new compliant inks to market, but the selection remained limited. “We do not have the same palettes available as in the past, not even close.”

Mr. De Pase, who also owns a chain of nine tattoo parlors, said the staff threw out their old color inks at the end of 2021 and spent the first three weeks of this year working only in black and gray. Now, his studios are spending about 5,000 euros a month, about $5,200, to stock new colored inks. Mr. De Pase was satisfied with their performance, but he said it would take years to see how they endured in the skin of his customers.

“Safety must come first,” he said, but that needs to be balanced against some tolerance for risk. He observed that a tobacco shop facing one of his studios sells cigarettes and cigars all day long. “There is a fine line.”

Mr. De Pase and his customer Emanele Gressani preparing for a new tattoo in his home studio in Grado, Italy. Credit…Ciril Jazbec for The New York Times
Tags
Ban New Over Tattoo That

‘We Want to Know Whose Brain Is Healing and Why.’

Alcohol-Related Deaths Spiked During the Pandemic, a Study Shows

The Ebony Test Kitchen, Where Black Cuisine Was Celebrated, Is Reborn

Uterine Cancer Is on the Rise, Especially Among Black Women

Is the Coronavirus in Your Backyard?