Tonight, after a 27-month hiatus, the event honoring Broadway’s best plays and musicals is back.

There will be plenty of awards — there are 25 competitive categories this year — and lots of speeches.

But the thrust of the evening is a little different: reminding viewers that Broadway has reopened after a disastrously long pandemic shutdown, and hoping that a showcase of show tunes and sentiment will persuade audiences to return. There are now 15 productions running on Broadway, and that number is growing every week, but the pandemic is not over, and tourism remains down, so the industry is looking for a boost.

The event is part streaming, and part network.

This year’s Tony Awards are taking place, live and in-person, at Broadway’s Winter Garden Theater, starting at 7 p.m. Eastern, and scheduled to end at 11.

Most of the awards will be announced during the first two hours, at a ceremony hosted by the six-time Tony winner Audra McDonald. That segment of the evening will be viewable only on the streaming service Paramount+.

The second half of the evening will consist of a concert at which stars of the theater world will perform classic and contemporary show tunes. That portion of the event, called “The Tony Awards Present: Broadway’s Back!,” will be hosted by Leslie Odom Jr. (a Tony winner for “Hamilton”) and broadcast on CBS, and it will include three big awards, for best musical, best play and best play revival.

Because the coronavirus pandemic is ongoing, the ceremony is restricted in many ways.

The red carpet is shorter than usual. There is no official after-party. (A request for a permit to hold one on the street was rejected by the city.)

And the audience watching in person will be limited — the Winter Garden holds 1,500 people, compared to 6,000 at Radio City Music Hall, where the event was often held in previous years. All of the attendees must show proof of vaccination, and they are being asked to wear masks throughout the event.

The awards ceremony will honor plays and musicals that opened during a pandemic-shortened eligibility period — from April 26, 2019, to Feb. 19, 2020. Only 18 shows were eligible for awards — about half as many as usual — and only 15 scored nominations.

The ceremony, originally scheduled to take place in June 2020, has been repeatedly delayed and rethought; the nominations, chosen by 41 theater experts who saw every eligible show, were announced last October, and electronic voting, by 778 producers, performers and other industry insiders, took place in March. The ballots were stored by the accounting firm Deloitte & Touche LLP, which somehow has managed to keep them secret ever since.

There are several unusual aspects to this season’s Tonys race.

All of the nominees for best score are plays — an odd situation caused by the fact that three of the four musicals that opened before the pandemic were jukebox musicals, meaning they did not have original scores, and the fourth was shut out by nominators.

In one category, best leading actor in a musical, there is only one nominee, Aaron Tveit of “Moulin Rouge!” He will win if he gets a positive vote from 60 percent of those who cast ballots in that race.

A starry concert will dominate the televised portion of the evening.

The Broadway League and the American Theater Wing, the two organizations that present the Tony Awards, decided, in discussions with CBS, that the portion of the evening with the broadest reach — that is, on network television — would be primarily a concert.

The goal is to highlight Broadway’s talent, and to remind viewers of the pleasures of live theater, with the hope that some of those viewers will then buy tickets to a show as theaters in New York (and around the world) seek to rebuild audiences.

What kinds of performances can you expect?

There will be, as per tradition, a razzly-dazzly opening number, led by Odom, at the start of the concert, celebrating Broadway and its shows.

The evening will appeal to theater lovers’ nostalgia: Jennifer Holliday will recreate her performance of “And I Am Telling You I’m Not Going” from “Dreamgirls” (which opened in 1981); Audra McDonald and Brian Stokes Mitchell are expected to perform from “Ragtime” (1998); Marissa Jaret Winokur and Matthew Morrison from “Hairspray” (2002); and Kristin Chenoweth and Idina Menzel from “Wicked” (2003).

Each of the productions nominated for the best musical Tony Award — “Jagged Little Pill,” “Moulin Rouge!” and “Tina” — will perform, as always, but this year those performances were recorded in advance inside the theaters where those musicals are running. (Why? To reduce the cost to the pandemic-damaged productions. In ordinary years, producers spend several hundred thousand dollars per musical to staff and stage live numbers at the Tony Awards.)

Two shows that are receiving special Tony Awards will also present live performances. David Byrne will lead the cast of “American Utopia,” his concert show that is now running, for a second time, on Broadway, while Lin-Manuel Miranda will be featured in a closing sketch from “Freestyle Love Supreme,” the improv group he co-founded, which is scheduled to begin its second Broadway run on Oct. 7, followed by a national tour starting in San Francisco.

What else? John Legend will perform with the cast of “Ain’t Too Proud,” a jukebox musical about the Temptations that is slated to resume performances on Broadway on Oct. 16. Daniel J. Watts, a Tony nominee for “Tina,” is expected to perform a spoken-word tribute to the Broadway Advocacy Coalition, which is receiving a special Tony Award for its work on racial justice. And, at some point, Ben Platt and Anika Noni Rose are expected to pay tribute to high school theater students with a song from “Sunday in the Park With George.”

The awards show is being executive produced by Ricky Kirshner and Glenn Weiss, who have put the ceremony together for years. Weiss is also directing the event, and it is being choreographed by Sergio Trujillo, a Tony winner for his work on “Ain’t Too Proud.”

The nominees for best musical are all jukebox shows.

The three nominees for best musical are “Jagged Little Pill,” “Moulin Rouge! The Musical” and “Tina — The Tina Turner Musical.”

All of them are jukebox musicals — meaning that their scores consist of previously recorded pop songs — and all of them opened in 2019.

The three nominated musicals are reopening this fall. “Moulin Rouge!,” which is an adaptation of the 2001 Baz Luhrmann film, began performances on Friday; “Tina,” which is a biomusical about the life and career of Tina Turner, returns Oct. 8; and “Jagged Little Pill,” a contemporary family drama inspired by the Alanis Morissette album, returns Oct. 21.

Adrienne Warren, the star of “Tina — The Tina Turner Musical.” The show is one of three nominees for best musical. Credit…Sara Krulwich/The New York Times

Only one show with an original score opened before the pandemic — “The Lightning Thief” — but it was shut out by nominators. Several other musicals with original scores were slated to open in 2020, but didn’t make it to opening night before theaters shut down.

A fourth jukebox musical, “Girl From the North Country,” opened right before the shutdown but was deemed ineligible for awards because not enough Tony voters managed to see it. That show, a drama inspired by the songs of Bob Dylan, is scheduled to resume performances Oct. 13.

There are no nominees for best musical revival, because the only one that opened before the pandemic, “West Side Story,” also was not seen by enough voters. And now that production is over — its producers have decided not to reopen it.

Keep an eye on the play categories for some drama.

As hard as it may be to believe, the last time a play by a Black writer won the Tony Award for best play was in 1987, when August Wilson won for “Fences.”

That could change this year, when the leading contender is “Slave Play,” a daring drama by Jeremy O. Harris that uses an imaginary form of couples therapy to explore the lingering impact of slavery. The play scored more Tony nominations — 12 — than any in history; it won strong review from critics and managed to achieve a level of buzz that is rare for any play, although, like most plays, it ended its run without recouping its capitalization costs.

But “Slave Play” was also polarizing, leaving an opening for another drama to claim the prize. The most likely upset would be by “The Inheritance,” a two-part drama by Matthew López about two generations of gay male New Yorkers. That play was heralded in London, but was greeted with far more skepticism in New York; its run was also unprofitable, and was cut a few days short by the pandemic.

The most likely winner in the category of best play revival will be “A Soldier’s Play” or “Betrayal.”

“A Soldier’s Play” is a 1981 drama by Charles Fuller, about the murder of a Black sergeant in the U.S. Army, that won the Pulitzer Prize when it was first published. It was then adapted into a Hollywood film, but didn’t make it to Broadway until 2020. The production, directed by Kenny Leon, starred Blair Underwood and David Alan Grier, and was presented by the nonprofit Roundabout Theater Company.

“Betrayal” is a 1978 play by Harold Pinter about an extramarital affair. The revival was a commercial production, transferred from London, directed by Jamie Lloyd and starring Tom Hiddleston.

And what about the actors?

The musical prizes all have heavy favorites, and the favorites would all be first-time Tony winners.

Look for Adrienne Warren to win the leading actress in a musical prize for her superhuman performance as Tina Turner in “Tina,” and for Lauren Patten to win as featured actress for her showstopping vocals in “Jagged Little Pill.”

Aaron Tveit, the only nominee for leading actor, should easily pick up that prize for playing the bohemian Christian in “Moulin Rouge!” (he needs to win support from 60 percent of those who cast ballots in the category to do so), while his co-star, Danny Burstein, is the favorite in the featured actor category, for playing the impresario Harold Zidler.

The play categories are thought to be much tighter, in part because there are fewer voters — to participate in any Tony race, a voter had to have seen each nominated performance, and that narrowed the pool of qualified voters.

But watch for one possible record to be set: Lois Smith, 90, is a leading contender for best featured actress in a play, for her work in “The Inheritance.” If she wins, she will become the oldest person ever to win a Tony Award for acting, a record previously held by Cicely Tyson, who won at 88.

Known for Feuding With Immigrants, a TV Star Wants to Run a Town Many Call Home 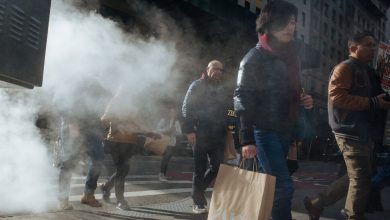 Meta and Salesforce present differing takes on the metaverse.