On the first page of Will Smith’s recent memoir “Will,” the global superstar recounts a gruesome story of watching his father strike his mother in the side of the head so hard that she spit up blood. The early chapters of the book continue in much the same way — a young Will, naturally charismatic and eccentric, takes on the role of family entertainer to save his mother, himself and everyone else.

“I would be the golden child,” he writes. “My mother’s savior. My father’s usurper. It was going to be the performance of a lifetime. And over the next 40 years, I would never break character. Not once.”

That he became a perpetual conqueror in his films starting in the mid-1990s — an alien-defeater in “Men in Black,” a robot-defeater in “I, Robot,” a mutant-defeater in “I Am Legend,” a druglord-defeater in “Bad Boys,” a George Foreman-defeater in “Ali” — might have been a trauma response, but it also turned him into one of the world’s most bankable actors. Off camera, he behaved much as he did on camera, revealing little: an unknowable person beloved by millions.

Over the last couple of years, Smith’s muscles have slackened somewhat. He’s become a loose and only semi-rehearsed presence on Instagram and TikTok. In addition to his uncommonly vulnerable autobiography, he also recently appeared in a six-part YouTube Originals series, “Best Shape of My Life,” ostensibly about losing weight but more about the deepening fissures in the outer shell of his public-facing character. For decades, he became one with his hardened facade; now he’s melting it down.

This pivot to transparency makes him the patriarch of a family that has lately made intimacy its stock in trade. The Smiths — Will, 53; his wife, Jada, 50; their children, Jaden, 23, and Willow, 21 — have become the first family of putting it all out there. Between Will’s newfound chill, Jada and Willow’s cut-to-the-quick chat show “Red Table Talk” and Willow and Jaden’s music, the Smiths have remade an elite old Hollywood unit for the new era of reality-driven celebrity. 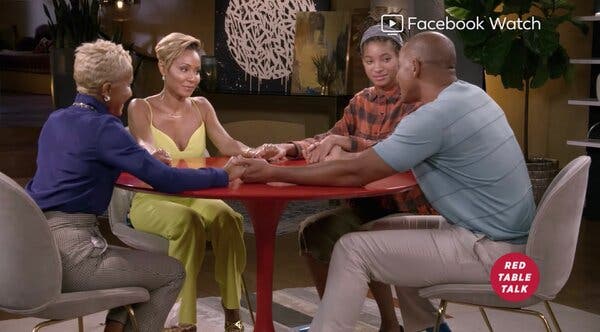 From left: Adrienne Banfield-Norris, Jada Pinkett Smith, Willow Smith and Will Smith in an episode of “Red Table Talk.”Credit…Facebook Watch

Their path has been the opposite of, say, the Kardashians’, the platonic ideal of the reality-TV clan that willed itself into more traditional stardom (forever blurring the lines between old and new fame along the way). The Smiths, by contrast, have downshifted from a conventional style of celebrity into the more fraught and garish one, and, crucially, have done so with a kind of grace — shocking, especially given the intensity of some of the revelations at play.

Theirs is a perfectly timed reframing for the age of online confessional and trauma-based personal brands, especially for a family in which the parents are receding from the camera eye, and the children were famous before they ever had a choice to opt out. It is also a profound validation of the power of emotional directness and its destigmatization for the famous, turning the sorts of revelations that would have been relegated to salacious tabloids and unauthorized biographies in earlier eras into the stuff of self-empowerment.

Will might be the Smith family member with the highest public profile, but it is Jada who helped draft the template of the family reinvention with “Red Table Talk.” The show, which appears on Facebook Watch, began in mid-2018, and quickly became known for unexpectedly vulnerable conversations, both with celebrity guests, and also between the hosts: Jada, Willow and Jada’s mother, Adrienne. Each woman holds her ground — take, for example, the episode about polyamory, in which Willow seems to baffle her co-hosts — but the inter-family good will prevents the show from ever erupting into true tension.

Reality programming has only become an alternate safe space for the most famous in the last couple of decades. Previously, behind-the-scenes confessionals were more the purview of tabloids, an unsavory side effect of fame to be avoided at all costs. But beginning in the early 2000s, the era of “The Osbournes” on MTV, reality programming began to provide an escape hatch in which the famous could leverage their renown before being nudged toward the offramp of career irrelevance.

It was novel then, and it ended up fomenting an entire cottage industry of second-chance grasps for attention, typically for C- and D-listers, both family docu-soaps and also shows like “Celebrity Rehab With Dr. Drew” and “Marriage Boot Camp: Reality Stars.” Social media extended the available possibilities, granting new oxygen for the well known who were on their way to becoming less well known.

For the Smith family, “Red Table Talk” provided proof of concept — it was acceptable, and even desirable, for the most prominent celebrities to make confessionals part of their brand.

More than one episode delves into the challenges of Will and Jada’s marriage, offering small brushstrokes of revelation about an oft-gossiped-about couple. They insist they will never split, because after surmounting unspecified challenges, “We don’t have any dealbreakers.” (At the end of the chat, Will aims to dispel some frequent rumors: “We’ve never been Scientologists, we’ve never been swingers,” though Jada does point out that the second is a term for a “specific lifestyle.”)

Watch enough “Red Table Talk” after reading Will’s book and absorbing his YouTube series and you might encounter the same tale told a few different ways — he’s been workshopping this unburdening for some time. Unlike Jada, who approaches the show and sharing her truths more casually, Will has fully embraced this shift and is treating it like he would a blockbuster film: rehearsal, polish, flawless delivery.

“Best Shape of My Life” begins as a weight-loss show — Will has a mild dad-bod paunch. To address it, he flies to Dubai to work with his personal trainer, as one does. He wants the process filmed, he says, because “the cameras act like my sponsor — they keep me accountable.” He partakes in intense physical challenges — walking to the top of the Burj Khalifa, the tallest building on the planet, or navigating the Dubai Police Academy obstacle course — and is also working on his memoir.

Soon, he begins to chafe at that accountability. Agonizing over the weight loss goal begins to feel like false tension. So does stress about the deadline for his book (underscored by what feel like staged voice mail messages from his assistant). Instead what unfolds is a tug of war between his compulsion to perform and his need to retreat. The fourth episode is titled “I Quit,” and then he continues for two more episodes — this is, after all, a Will Smith production. But seams are fraying: In the fifth episode, he crows, “[expletive] the budget, [expletive] the deadline — they’ll get what we give them.”

Several segments of the show are given over to Will’s reading segments of his memoir to family members and friends. These moments limn vulnerability without ever detaching it from performance — Will cries about the challenges in his childhood home, and his onlookers, including his therapist, nod along. At least a few years past his box-office-domination peak, he has built a more scalable reward system.

(And lest you forget that the family rebrand is in no small way a business venture, there are untold cross-promotional opportunities. On “Best Shape,” Will often wears clothes from his Bel-Air Athletics line. When the family gathers in Miami to hear Will read chapters about them, the table is stocked with the signature blue square bottles of Just Water, Jaden’s company.)

Jaden Smith holding a bottle of his Just Water at a film premiere in New York.Credit…Noam Galai/Getty Images

Once the sort of superstar known for smooth maximalism, Will has experimented with this sort of behind-the-scenes content before: “Will Smith’s Bucket List,” a series on Facebook Watch, and “Will Smith: Off the Deep End,” a nature immersion doc. But the last year has constituted a multiplatform career rebrand in which Smith uses all the tools of celebrity in service of peeling back its layers.

In his autobiography, he writes movingly of the tug of war he feels in regards to his father, who instilled in Will the discipline with which he would build his astronomically successful career but was also abusive. In one section, he suggests that he considered pushing his elderly father down a flight of stairs as retribution.

But the real revelation about Will’s relationship to parental authority comes in “King Richard,” last year’s biopic about Richard Williams, father of Serena and Venus. Richard Williams was often maligned for the single-minded way he raised his daughters, but Will plays him empathetically as a stubborn hero, leaning into his doggedness but never making him an object of derision. (He was nominated for an Oscar for the performance.) No means are beyond bounds when the ends are so enviable.

It’s likely the role has double meaning for Will — on the one hand, it’s a celebration of the transformative discipline he learned from his own father (in a non-abusive context), and on the other, it’s an argument for his own style of parenting. In both the memoir and at the Red Table, he speaks openly of how his heavy-handed fathering of Jaden and Willow exploded in his face on multiple occasions. When Willow’s first single, “Whip My Hair,” became a hit, she rebelled against the pressures of touring by shaving her head. The action film he made with Jaden, “After Earth,” was a colossal flop. (Will has another son, Trey, from his first marriage, who is a sometime D.J. and occasionally appears on “Red Table Talk.”)

And yet the levelheadedness of the younger Smiths is somewhat remarkable. They are untethered thinkers in the way that children of privilege can often be, but they are also curious and empathetic and, all things considered, decidedly warm. (Listen to Jaden talk about learning how to navigate paying for dinner and you’ll melt.) Given their parents’s full-circle journey to untouchable celebrity and back, and given that they were born into a far more transparent generation, it’s easy to adapt to their family’s newfound visibility.

Jaden has largely retreated from the spotlight, though he did release an album last year, “CTV3: Day Tripper’s Edition,” full of spacey dream-pop. When he shows up on “Red Table Talk” or in the “Best Shape of My Life” series, he appears almost impossibly wise.

Willow has, relatively quietly, released five albums, recently honing in on a wiry pop-punk style that’s both tart and fashionable. Last year’s “Lately I Feel Everything” is her best album, and it includes the scarred anthem about duplicity “Transparentsoul” and raw songs like “Xtra,” in which she seeks space for a deep exhale: “I don’t mean to break so easily under the pressure/Need some time alone to breathe, I need some tree and fresh air.” And the album she released in 2020 as part of the duo called the Anxiety (which also includes Tyler Cole) features “Meet Me at Our Spot,” which became a huge hit on TikTok last year as a soundtrack for young creators to shamanistically lose themselves in dance.

At the Red Table, Willow is a beacon of earnestness and humanity. Feeling deeply is the center of her public presentation; her conversation with Paris Jackson was less interview than sympathetic embrace (At one point, Willow suggested that she’d cut herself in her younger years.) In her music and in her Red Table conversations, she grasps the futility of hiding her feelings, so she doesn’t bother.

For Will and Jada, though, the high wire act of confession is, naturally, a reassertion of power. To be this vulnerable, effectively without fear of reprisal or public collapse, is perhaps the ultimate test of celebrity. The only question that remains is what secrets still lurk behind all this transparency.

Tags
One Show Smith That Will

‘This Is Not My City’: Protesters Turn a Quiet Capital Upside Down

A New Look for ‘Ulysses’

For India’s Effort to Ban Disposable Plastic, One State Offers a Playbook