In January, the board of Paramount, including Shari Redstone, the company’s chair, met with a group of bankers to get an update on the media industry and to hear about potential deals that might help the company better compete with streaming giants like Netflix and Disney.

The bankers, from Goldman Sachs and LionTree, came with many deal ideas, according to four people with knowledge of the meeting. The most logical one, the bankers said, was combining some parts of Paramount — which owns networks like Nickelodeon and MTV, and the Paramount+ streaming service — with those owned by Comcast, the cable giant that owns NBCUniversal and the Peacock streaming service. The two companies already have a streaming joint venture in Europe.

But in the end, the board, Ms. Redstone and Bob Bakish, the company’s chief executive, did not feel compelled to pursue any of the combinations. They would continue to zig while Hollywood zagged.

That is, Paramount —with its collection of streaming services including Pluto TV and Showtime in addition to Paramount+ — would keep going it alone.

The fast rise of streaming has reshaped the media industry in just a few years as companies have felt pressure to spend billions on new TV shows and movies to attract enough subscribers to compete with the industry’s giants. MGM, the famed movie studio, sold to Amazon. And Discovery combined with WarnerMedia, the film and TV giant behind “Game of Thrones” and “Succession.”

Not Paramount. Since the company was created from the merger of Viacom and CBS three years ago, it hasn’t sought another big deal. Instead, the company has been trying to build its own profitable streaming business before the flow of cash from traditional TV, still its big moneymaker, runs dry.

In interviews, both Ms. Redstone and Mr. Bakish said that Paramount, with its global footprint, its streaming businesses and the movie studio behind the new hit film “Top Gun: Maverick,” would have success on its own terms.

“In many respects we continue to be the underdog, and that’s OK,” Mr. Bakish said. “But I think as time goes on, people will continue to increasingly see that Paramount is powerful.” 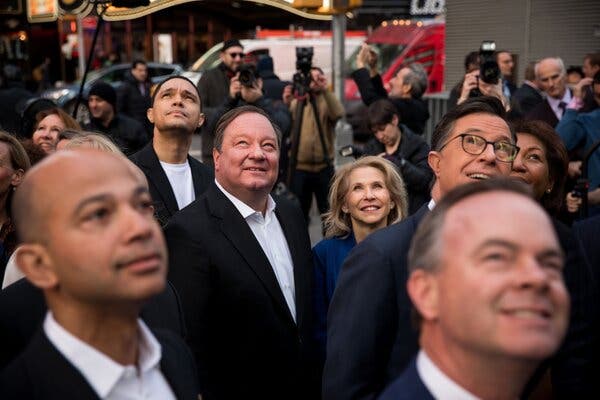 Bob Bakish, Paramount’s chief executive, center left, and Shari Redstone, the company’s chair, marking the merger of Viacom and CBS in 2019 at Nasdaq in Manhattan.Credit…Michael Nagle/Bloomberg

Ms. Redstone and Mr. Bakish still have to persuade much of Wall Street. In the years since Ms. Redstone championed the effort to unite the two halves of her family’s media empire — Viacom and CBS — to form Paramount, the value of the combined company has fallen significantly. The day the merger was announced, in August 2019, Wall Street valued both companies at $29.6 billion. Today, Paramount is worth $22.1 billion, a 25 percent decline. The share prices of Paramount’s competitors, including Disney and Netflix, have also declined over the same period.

Rich Greenfield, a co-founder and analyst at LightShed Partners, a research firm, is skeptical that Paramount can survive on its own. Paramount’s streaming business is growing quickly, but it’s still not profitable, Mr. Greenfield said. And much of the audience for Paramount’s signature content — think MTV and Nickelodeon — has shifted to new-media platforms like TikTok and Instagram.

The Race to Rule Streaming TV

“I don’t think there’s anybody who believes that in five years, this company won’t either have bought other things or become part of something larger,” Mr. Greenfield said. “It’s eat or be eaten time.”

In recent weeks, Wall Street has put a sharper focus on the profitability of streaming businesses. Netflix said in April that it lost streaming subscribers in the first quarter of the year, reversing a decade of growth and causing its stock to tumble. Mr. Bakish said that competitors like Netflix — which he cheekily calls “legacy streamers” — are only now coming around to the importance of the revenue strategies Paramount has embraced for years, including advertising.

The box office, another traditional business largely eschewed by Netflix, is another example, Mr. Bakish said. “Top Gun: Maverick,” is on pace to generate $150 million in ticket sales during its opening weekend, but, in an exception to most movies produced by the studio, it won’t appear on Paramount+ within the typical 45-day window.

Still, some experts think Paramount’s strategy is sound. Brett Feldman, an analyst for Goldman Sachs, said that the global market for streaming subscribers is far bigger than the audience for pay-TV subscribers. Paramount+ added 6.8 million subscribers in the first quarter of 2022. Mr. Feldman is in the minority of analysts who have a “buy” on Paramount.

“Not everybody pays for cable, especially outside the U.S.,” Mr. Feldman said. “Most people have an internet connection or cellphone to stream video.”

Ms. Redstone said Berkshire Hathaway’s investment in Paramount took her by surprise. She got the news hours after it had become public.

“I was out to dinner and the person said to me, ‘What do you think of Buffet’s investment?’” Ms. Redstone said. “And I was like, ‘What?’”

Kevin Costner in “Yellowstone.” The modern-day Western has become one of TV’s most popular series.Credit…Paramount Network

Paramount’s ultimate fate will most likely be determined by Ms. Redstone, who emerged victorious in 2018 from a bitter legal fight with Les Moonves, then the chief executive of CBS, to keep control of the entertainment assets her family had owned for decades. Like her father, the shrewd and bellicose lawyer-turned-mogul Sumner Redstone, Ms. Redstone controls Paramount through National Amusements, a holding company she runs that owns voting stock in the company.

Whereas Mr. Redstone was known for cantankerous and impulsive decisions — he once threatened to sever Paramount’s ties with Tom Cruise after his couch-jumping episode on “The Oprah Winfrey Show” — Ms. Redstone is a more understated leader. She underscored the contrast with a joke.

“As I said to my dad once, I said, ‘Everything I am is because of you, except for the nice parts — that came from my mother,’” she said, laughing.

Ms. Redstone said she weighs in on the direction of the Paramount in one-on-one conversations with Mr. Bakish and spends time cultivating business relationships inside and outside the company. She introduced Mr. Bakish to Brian Robbins, who eventually became chairman of Paramount with her support, and helped broker a deal with the South Korean entertainment firm CJ ENM by connecting Mr. Bakish to Miky Lee, the vice chairwoman of the firm’s parent company.

The actor Tom Cruise on the deck of an aircraft carrier in San Diego earlier this month to promote the movie “Top Gun: Maverick.”Credit…Vivien Killilea/Getty Images Paramount Pictures

Ms. Redstone was an early supporter of Paramount’s decision to compete directly with major players like Disney and Netflix in direct-to-consumer streaming — a strategy that was still up in the air when Viacom and CBS merged in 2019.

In the aftermath of the merger, leaders at the company debated whether to invest in its existing subscription streaming service — then known as CBS All Access — or to forgo streaming for an “arms dealer” strategy: selling movies and TV shows to other streaming companies, according to three people with knowledge of the discussions.

So In early 2020, just weeks after the deal closed, Paramount decided to make an initial foray into streaming: The company would put some content from Viacom on CBS All Access, effectively bulking up the service quickly without spending to produce original content.

A few months later, with encouragement from Ms. Redstone and Marc Debevoise, then the company’s digital chief who had co-founded CBS All Access, Paramount decided it would spend money on original movies and TV shows for the service, effectively entering the streaming fray, the people said.

That spring, Mr. Bakish called a series of meetings and asked the heads of each of the company’s network groups to pitch projects for inclusion in a companywide subscription streaming service.

By July of that year, the company was finalizing its current course. At a board meeting, company executives summarized the strategy, along with several possible names for the as-yet unnamed streaming service: Paramount+, Honeycomb, The Eye and Pluto+. (The last option was inspired by the company’s popular advertising-supported streaming service.) Over the summer, they settled on Paramount+, according to two people familiar with the matter.

Under the revamped streaming strategy, major Paramount movies — with the exception of some hits, like “Top Gun: Maverick” — are released on Paramount+ within 45 days of theatrical release. The idea behind that approach is that it gives Paramount one foot in the emerging streaming era and one planted firmly in the traditional moneymaking ways of old Hollywood.

At the premiere of “Top Gun: Maverick” last month, shortly after a splashy promotion on a rented aircraft carrier in San Diego, Mr. Cruise paid homage to Sumner Redstone. As Ms. Redstone looked on, Mr. Cruise noted that the movie was being widely released on May 27, which would have been Sumner Redstone’s 99th birthday. (He died in 2020.)

Ms. Redstone said she believed that her father would generally agree with her approach toward Paramount. And she said she thinks that Wall Street will ultimately come around, provided the company delivers on its promises.

“I think the market keeps saying, ‘Show me, show me,’” Ms. Redstone said. “And I really believe we keep showing them.”

Even in Flush Tennis, Equal Pay is a Struggle

Plane Goes Missing in Nepal With 22 Aboard

The Week in Business: Time to Slow the Economic Stimulus

Fed Chair Says Bringing Inflation Down Will Take ‘Some Pain’