WASHINGTON — Russia is ambling toward a major default on its foreign debt, a grim milestone that it has not seen since the Bolshevik Revolution more than a century ago and one that raises the prospect of years of legal wrangling and a global hunt by bondholders for Russian assets.

The looming default is the result of sanctions that have immobilized about half of Russia’s $640 billion of foreign currency reserves, straining the country’s ability to make bond repayments in the currency the debt was issued in — dollars. Girding for a default, Russia has already pre-emptively dismissed it as an “artificial” result of sanctions imposed by the United States and its allies, and it has threatened to contest such an outcome in court.

The coming fight, which would probably pit Russia against big investors from around the world, raises murky questions over who gets to decide if a nation has actually defaulted in the rare case where sanctions have curbed a country’s ability to pay its debts.

Russia does not appear likely to take the declaration of a default lightly. If that should occur, it would raise Russia’s cost of borrowing for years to come and effectively lock it out of international capital markets, weighing on an economy that is already expected to contract sharply this year. It would also be a stain on the economic stewardship of President Vladimir V. Putin that would underscore the costs Russia is incurring from its invasion of Ukraine.

At stake for Russia, which has already suffered the abrupt rupture of decades of crucial business ties with the United States, Europe and other nations, is one of the underpinnings of economic growth: the ability to smoothly borrow money from outside its borders.

Since Russia’s predicament is so unusual, it remains something of an open question who is the ultimate arbiter of a sovereign debt default.

“This points to the squishiness and patchwork nature of sovereign debt markets,” said Tim Samples, a legal studies professor at the University of Georgia’s Terry College of Business and an expert on sovereign debt. “I think this is set to be convoluted and disputed for a variety of reasons.”

Mr. Samples suggested that there could be a “cascade” of events that brings Russia to a default.

The most direct verdict could come from the big credit ratings agencies, which have already signaled that Russia’s credit worthiness is eroding and that a default could be on the horizon.

This past week, Moody’s warned that Russia’s payment of about $650 million of dollar-denominated debt in rubles on April 4 could be considered a default if it does not reverse course and pay in dollars by May 4, when a 30-day grace period concludes. That followed a similar warning earlier in the week by S&P Global, which placed Russia under a “selective default” rating.

But it is not clear how the ratings agencies will weigh in if Russia fails to make payments after its grace periods run out because of European Union sanctions that have restricted the agencies from rating Russia. Spokesmen from Moody’s and S&P did not comment. A Fitch spokesman said he could not offer any comments on Russia’s creditworthiness in light of the sanctions.

The Biden administration put additional pressure on Russia earlier this month when the Treasury Department started blocking Russia from making debt payments using dollars held in American banks. That new restriction was intended to force Russia to choose between draining the remaining dollar reserves it has in Russia or using new revenue (from natural gas payments, for example) to make bond payments and avoid defaulting on its debt.

Russia can still make payments on Russian sovereign debt as long as it is not trying to use funds from Russian government accounts that are held in American financial institutions.

After the grace period on the foreign currency bond payments expires on May 4, the next key moment will be May 25. That is when American bondholders will no longer be able to accept Russian debt payments under a temporary exemption that the Treasury Department has allowed.

The Russian central bank’s offices in Moscow. A default would raise Russia’s cost of borrowing and effectively lock it out of international capital markets.Credit…The New York Times

While the verdict of the ratings agencies carries significant weight, bondholders will determine the consequences of Russia failing to make payments that were due or that violate the terms of its contracts. The bondholders could take a wait-and-see approach or declare that the bonds are immediately due and payable, which could cause other bonds with “cross default” provisions to also be in default.

Another potential arbiter of default is the Credit Derivatives Determination Committee, which is a panel of investors in the market for default insurance, or credit-default swaps. The committee is deliberating whether Russia’s payments in rubles constitute a “failure to pay,” which would kick-start insurance payouts. The panel already ruled that the state-owned​​ Russian Railways JSC was in default for missing a bond interest payment.

To some analysts, that decision and the payments in rubles mean that Russia already is technically in default.

“If Russia doesn’t pay on time, doesn’t pay in the currency in the contract, that’s a default — it’s crystal clear,” said Timothy Ash, a senior sovereign strategist at BlueBay Asset Management. “For all intents and purposes, Russia is already in default.”

The Russia-Ukraine War and the Global Economy

Rising concerns. Russia’s invasion on Ukraine has had a ripple effect across the globe, adding to the stock market’s woes. The conflict has already caused​​ dizzying spikes in energy prices and is causing Europe to raise its military spending.

The cost of energy. Oil prices already were the highest since 2014, and they have continued to rise since the invasion.  Russia is the third-largest producer of oil, so more price increases are inevitable.

Gas supplies. Europe gets nearly 40 percent of its natural gas from Russia, and it is likely to be walloped with higher heating bills. Natural gas reserves are running low, and European leaders worry that Moscow could cut flows in response to the region’s support of Ukraine.

Food prices. Russia is the world’s largest supplier of wheat; together, it and Ukraine account for nearly a quarter of total global exports. Countries like Egypt, which relies heavily on Russian wheat imports, are already looking for alternative suppliers.

Shortages of essential metals. The price of palladium, used in automotive exhaust systems and mobile phones, has been soaring amid fears that Russia, the world’s largest exporter of the metal, could be cut off from global markets. The price of nickel, another key Russian export, has also been rising.

Financial turmoil. Global banks are bracing for the effects of sanctions intended to restrict Russia’s access to foreign capital and limit its ability to process payments in dollars, euros and other currencies crucial for trade. Banks are also on alert for retaliatory cyberattacks by Russia.

Defaults have been tied up in courts before. Argentina notably defaulted in 2014 after negotiations with hedge funds that refused to accept reduced payments broke down and a federal judge in the United States ruled that it could not make its regular payments on bonds without also paying the hedge fund holdouts. The U.S. Supreme Court declined to hear Argentina’s appeal in the case.

Russia’s case is unique because of the sanctions, and it is expected to argue that its ability to make payments in the currencies in its bond contracts has been constrained because it cannot access all of its reserves.

Mr. Ash suggested that it would be difficult for Russia to find a court that is sympathetic with Russia’s position.

But Mr. Samples suggested that, given Russia’s global pariah status, creditors could struggle to pursue Russian assets even if they win a favorable judgment in court.

He predicted that Russia would look for creative ways to avoid acknowledging a default, such as pointing to arcane language in bond contracts that could be interpreted to allow for payments in other currencies or by seeking a friendly court jurisdiction, perhaps in Russia.

“I do expect them to stick to their own alternative facts,” Mr. Samples said.

Despite the symbolism of a default, the economic implications for Russia and the world could be relatively small.

Economists estimate that Russia’s total foreign public debt amounts to about $75 billion, while Russia’s annual energy sales are worth about $200 billion. Investors have been anticipating a default since late February, and policymakers have suggested that a default does not pose a threat to the stability of the financial system.

Ultimately, the market will determine whether Russia is worthy of credit, and its actions in Ukraine and future sanctions will determine the fate of its economy.

“It feels like garnish and a dressing on top of a very ugly and profound set of circumstances,” said Anna Gelpern, a Georgetown Law professor who specializes in sovereign debt. “They’re drinking from a fire hose as far as the energy revenues, so why do they need to borrow?”

Peng Ming-min, Fighter for Democracy in Taiwan, Dies at 98

Crunch at Ports May Mean Crisis for Family Farms

How the Recoil From Russian Gas Is Scrambling World Markets 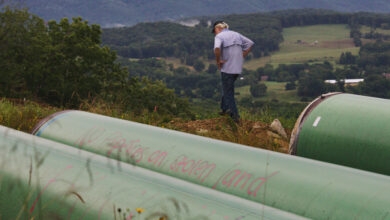